Traditional heating oil has been reformulated and infused with renewable Bioheat® fuel to make it more environmentally friendly and more energy efficient. That’s why every gallon we deliver to our customers is B20 Bioheat Plus® fuel. 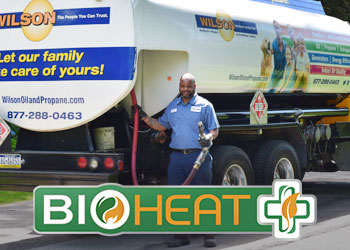 Bioheat® fuel is a blend of ultra-low sulfur heating oil combined with biofuels made from renewable resources such as animal fats, recycled restaurant cooking oils, algae and plant oils. Our B20 Bioheat Plus® fuel is made from locally sourced products, which aids in reducing waste within our communities.

The “B20” part of B20 Bioheat Plus® fuel represents what percentage of the fuel is made with biofuels. That means that our Bioheat® fuel is made with 20% biofuels. This high level of biofuel is why B20 Bioheat Plus® fuel burns extremely clean—generating less greenhouse gas emissions than a natural gas system. Methane—the main component of natural gas—has the capacity to trap so much heat in the atmosphere that over one century, one ton of this gas causes 32 times as much warming as one ton of carbon dioxide.*

Using Bioheat® fuel to warm your home saves you money! Your heating system will not only burn fuel more efficiently, it will also last longer and require fewer repairs.

Bioheat® fuel can be used in your existing heating system without modification. You won’t need to make a further investment in equipment to enjoy the benefits of Bioheat® fuel. Further, getting Bioheat® fuel deliveries may extend heating equipment life while reducing heating maintenance and service calls.

What is the future of Bioheat® fuel?

Moving forward, we expect the percentage of biofuel in our Bioheat® fuel to keep increasing. The heating oil industry has made a commitment to achieving net-zero carbon emissions by 2050 due to the increased use of Bioheat® fuel with higher blends.

Bioheat® fuel is one of the fastest growing alternative fuels in the nation! Get this premium, clean-burning fuel today when you become a Wilson Oil & Propane customer. Reach out to us and become a customer today.